Testimonial for our Norfolk Moving Services

Testimonial from another satisfied moving customer:

Security Storage & Van Company, a norfolk moving company, prides itself in offering quality service and the highest quality of moving, storage and shipping available. See what our customers are saying about us.. If you would like to send us your comments, please contact us. 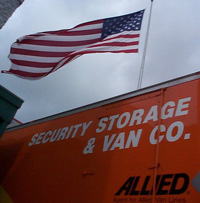 Scott, Anton and Anthony did a great job moving my son Matt from Portsmouth to Charleston.  Despite the hottest and most humid day of the year, they got it all done in four hours.  I know you are very proud of your hard working guys.  Please thank them again for taking good care of my son.

To the powers that be a Security Storage –

I recently experienced the pleasure of having an interstate move completed by your company.  It’s so seldom these days that one can write a glowing review of any company but this is surely an exception.

While receiving great reviews should be the norm when doing business, it’s sad to say that it isn’t.  When I first went online to get moving quotes, I was inundated with calls from four other companies.  In varying degrees, they all irritated me – too pushy, too demanding, too **we need the money NOW** I spoke to what sounded like teenagers that had no idea what basic furniture was, I spoke  to aggressive sales people, I spoke to people that told me I couldn’t possibly find a moving company that would do what you did easily.

My first contact with Allied was in the person of Joyce Ortman – she came to my home, she looked, she walked around, she asked loads of questions as she estimated what it would cost to move my things.  Had I not left some things behind, I think her estimate would have been dead on.  Every other phone estimate I had received was far too low – which with other companies would have cost me more money.  Allied has such faith in their people that if, for whatever reason, my load was over the weight quoted? It ships at no extra cost to me – that tells me that you have faith in your people, that you know they do a good job and you’re comfortable taking their word for it that they’ve done it right.  Joyce is SO sweet, very accommodating, extremely funny and gets the job done.  She was a voice of reason when I had to do some swapping of dates, kept me calm, reassured me that everything was going to be fine – and when I asked if she had any boxes that she had picked up in her travels, on both occasions, the boxes were at my house the next day.  I don’t know anyone else that provides customer service like that.

My packout was 29 March.  Bright and early, I met with Scott, Tee and Anton.  All names I had previously seen on the Internet, all with favorable comments about them.  They are personable, professional and all three have wicked sense of humor.  They took what could have been a hugely stressful day and made it easy.  It’s obvious that Scott is well respected and he treats his crew very well.  They all worked as a team, they all worked hard and they all did a great job.  I had done my own packing – and as they started to empty rooms, I continued to pack boxes and they continued to pick them up and load them –

Two days later, the truck again pulled up in front of what is now my new home.  I was excited to see my things being brought into a place that represents a new chapter in my life.  I had not one broken item, not one missing item, not one damaged item – I know you’ve read the online reviews of people that didn’t get their things, their things were irreparably damaged – I’ve read them also.  **although, in all fairness, they were written by people that did NOT use Allied**The seemingly endless load of boxes were put in the rooms I asked them to be put in, things were moved carefully and both Scott and Tee**Anton was sick that day**worked very hard to make sure that things were exactly right.

What was simply outstanding to me?  I was doing this move alone – a whole house, an interstate move, just me and the cats – all of the folks I dealt with were so very kind and understood the stress involved in even making the decision to move and then the execution of that plan.

The cats are now settled into their new home.  My house is unpacked and things are in their place.  This could have been an awful experience but it was easy.  Your company made it that way. No hesitation to recommend Allied/Security to anyone contemplating a move.  It’s obvious to me that not only does Allied care about the customer?  It cares about its own people – and that’s what makes the difference.

Thank you every so much –

Get a Free Quote